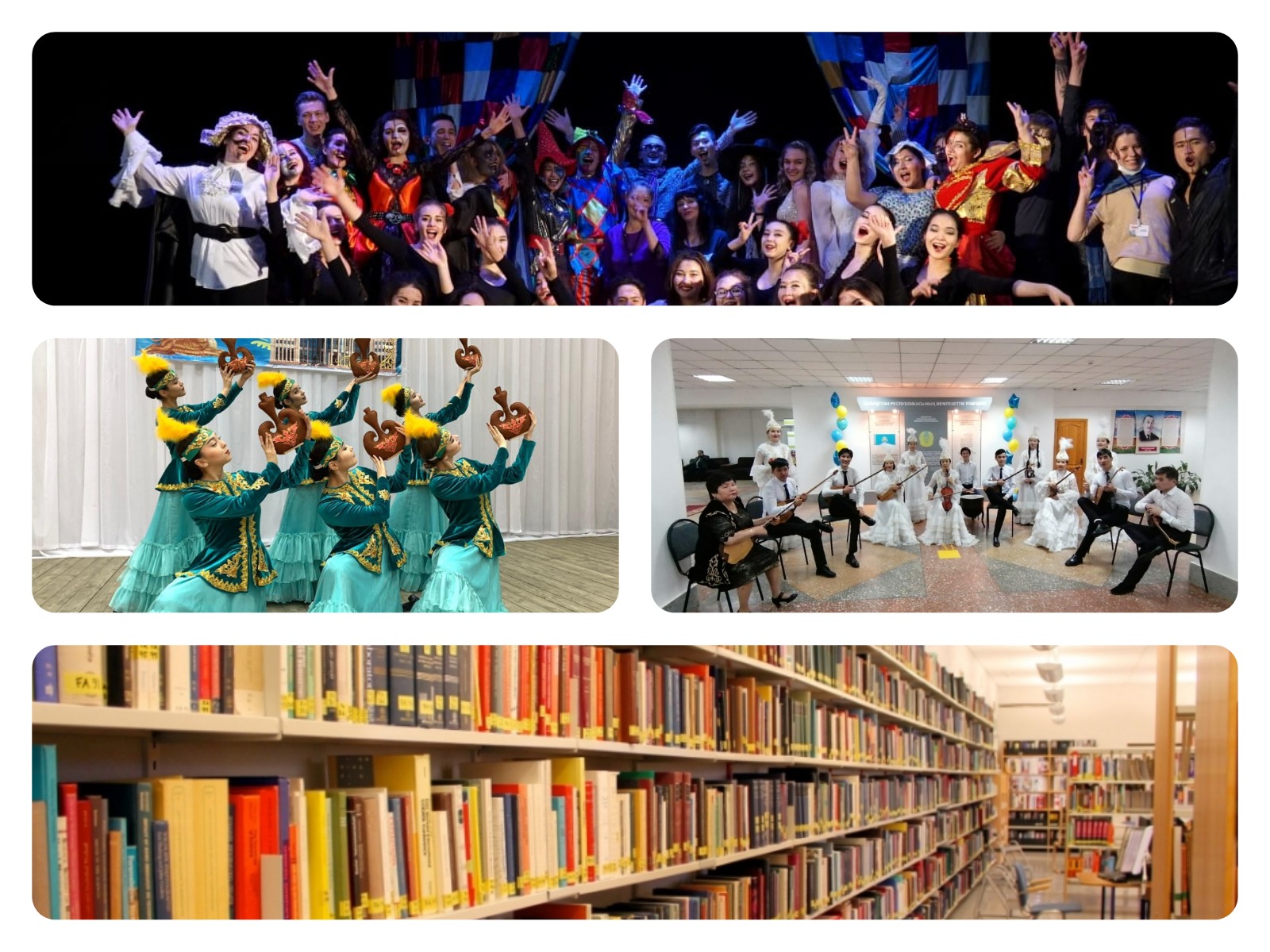 Qualification: 0403013-1 “The teacher-organizer of leisure, the head of the dance team”,

0403013-5 “The teacher-organizer of leisure, the director of mass theatrical

The standard educational period is 3 g. 10 m. On the basis of basic general education

Normative period of study: 2 years 10 months on the basis of basic general education

The Department of Culture of the Aksu College named after Zhayau Musa originates from the formation of the Ermakov Culture and Education School, created to train specialists in the field of recreation and entertainment for workers.

Ermakovo cultural and educational school was founded in 1966. In the early years, the school had a department for cultural and educational work with specializations in choral and orchestral conducting, and in 1968 the first graduation in the specialization “The head of the choir collective” took place. Among the first graduates: Gibbert N., Kirilenko E., sisters Honina, Volskaya M., Kodin P., etc.

In 1967 there was a replenishment of teaching staff. The main teaching staff was formed. These were mainly graduates of the Pavlodar musical school Degtyarev A.G., Sorokina R.D., Solovyova L.S., Rakhmatulin M.G. and others. In the following years, a knowledgeable, creatively working team of teachers was formed, which brought up more than one generation of club workers who all their life have been connected with the sphere of culture, these are

At the time of the organization of the school there was no building, classes were held in different places: in the Builder Culture House, in the District Culture House. In 1967, the school received its own building, located on the territory of PL-19, in the same year a new dormitory for 500 people was built and commissioned on Auezova-4 Street. The living and study conditions of students have become completely different.

In 1969, graduates of the Moscow Institute of Culture Sudakov V.I., Kazinsky N.P., Dyachenko A.M. arrived who fruitfully began to work with students of orchestral specialization.

In 1976, a choreographic specialization opened in the school, the first teachers of which were graduates of the Moscow Institute of Culture and the Omsk Cultural and Educational School V. Makarenko, V. A. Potalitsyn, A. A. Danilov, T. I. Potalitsina Among the first graduates of the choreographic specialization were: Pryada T.G. Shayakhmetova GB, Galakhova A. Yu. Abdrakhmanova Z., Shamrikova M., Boytsova T

. In 1981, the director’s specialization began, the first teacher of which was Safronova N.I., then graduates of the Chelyabinsk and Barnaul cultural institutes arrived Dove M.F., Abakumova G.N., Shmydko A.A. Among the first graduates in 1983 were Kasyakina L., Koneva N., Perfilieva N., Kun T., Gaimanov B., Saniyazov A., Pugacheva L., Sagandykova G., who after graduating from higher educational institutions and continued their labor activity both in cultural institutions of the region, and in his educational institution.

In 1967, a library department was organized. Its organizer and first teacher was Tamara Ivanovna Lakman. From 1969 until reaching retirement age, she worked as a teacher Lyudmila Aleseyevna Shapovalova, who for several years was the head of the library department.   For many years before the last graduation in 1997, Demidenko I.S., Schweizer L.A., Rogalskaya E.I., Shiryaeva O.E., Nikiforova A.F., Manerova A.M., worked at this department. Musina S.M., Suleimenova B.D., Danilina S.V., Afletonova A.V.

The first graduation of librarians was in 1970. Many of the graduates continued their studies at higher educational institutions. Among them are Dyomina N., Ivanova O. Singer R.T. Krasnikova V.P., Danilina S.V., Edenova A.B., Sultanova G.M. Shchipunova E.Yu., Ponomareva A.S. . Among the first graduates who did not change their profession and who retired from the library are Tulemisova Zh.T., Wagner MP

The training of librarianship specialists was resumed at Aksu College named after Zhayau Musa in 1998, first in the correspondence course, since 2003 and in full-time education. Devoted to the task of training specialists in library work for many years, V. Krasnikova

Currently, the Department of Culture is preparing specialists in the specialties of “Librarianship” and “Socio-cultural activity and folk art.” In 2017, the team celebrated its 50th anniversary – it’s a lifetime. A whole galaxy of cultural workers has been trained and educated, many of whom still worthily carry this high rank not only in Pavlodar Irtysh, but also in the near and far abroad.

The department has formed a close-knit team of experienced and young teachers who conduct a large educational, methodological and creative work, participating in various contests, festivals, concert programs, as well as directing mass events, choreographic performances, and theatrical performances. Such creative groups as the consolidated choir, the Dostar vocal group, the Әdemi-au vocal group, the Zhastar dance ensemble, the Impulse plastic studio, the Blue Bird bird theater, the Holiday in Every Home club, and the club Books ”, always take prizes, are diploma winners and many regional, republican and international competitions.

The result of the pedagogical activity of the team is the employment of graduates. From experience, it can be noted that some of the graduates are employed while still in production (undergraduate) practice. Graduates of the department of culture today are in demand in the labor market of the socio-cultural sphere of Pavlodar region.

A team of teachers and students preserves and honors the traditions laid down by their predecessors many years ago: these are celebrations, ceremonies, and competitive programs such as: Initiation into Students, Best in Profession, Miss College, where the transfer of the Miss crown has become traditional “Last year” Miss “this year, KVNov,” Zhigit Sultans “,” Kyz sons “, etc.

A new college has developed new traditions: this is a joint celebration with all departments of public holidays, such as the Day of the Languages ​​of the People of Kazakhstan, Independence Day, Nauryz, Day of Unity of the People of Kazakhstan, Victory Day. In anticipation of the New Year holidays, a DJ competition, New Year’s show program, New Year’s children’s party for children of college employees. Vivid events are remembered for such holidays as International Dance Day, Theater Day, Small Olympic Games.

At the end of the educational process, the last calls are held, the graduation ceremony, as a bright colorful holiday with concert numbers of students of the department of culture.

Participating in city, regional, republican and international competitions, festivals and events, such as: the annual festival of culture and arts of the peoples of Kazakhstan, “Ertis Zhuldyzdary”, “Delphic Games”, “Crystal Ringing”, “For a Healthy Lifestyle”, “Youth against drugs ”,“ Sarbaz envelope ”, creative groups and students always take prizes, are diploma winners and many of them.

The best of the best

The teacher Bisembaev K. Zh. During the celebration of the Teacher’s Day was awarded the Certificate of Honor of the Akim of the city of Aksu for many years of work and contribution to the social and economic sphere of the city.

In November 2017, on the basis of the GDK im. Eating with the support of the Department of Youth Policy of the Pavlodar region (organizer of the People’s Youth Theater “Promen”) was held3 Republican Youth Theater Festival “New Territory 2017”. 10 theater groups took part in the competition.

Master classes were held in the festival program. The festival was covered in the media.

On December 8, 2017, on the basis of the college, together with OCST and KDD “Shanyrak” in Pavlodar, a regional seminar was held with the participation of cultural workers of the region. Teachers of the department of culture held master classes. In the final part of the seminar, letters of gratitude were awarded for fruitful cooperation to improve the skills of cultural workers of the Pavlodar region and for the active participation in the organization of the regional seminar by teachers Nagornaya L. P., Panikhin A. L., Krylova Yu. V., Malygina A. Yu. , Amirkhanova M.T., Kolesnikova N.N., Bisembaev K.Zh.

On February 6, 2018, a competition “Tugan Olkem – Kereku” was held among the agitation teams of enterprises, organizations, and institutions of the city on the 80th anniversary of the Pavlodar region and the 20th anniversary of Astana in the Aksu city of S. Donentaev. The Blue Bird Student Theater and Impulse plastic studio (leaders Nagornaya L.P., Panikhin A.L., Amirkhanova M.T.) took an honorable second place and were awarded with a Diploma and a valuable prize.

On March 27, 2018, as part of the celebration of International Theater Day, the S. Donentayev State Duma hosted the city theater festival of youth, youth and adult theatrical groups “Kazhayyptary Theater”, dedicated to the 80th anniversary of the Pavlodar region.

The Student Theater “Blue Bird” with the performance “Centaurs” won the Grand Prix and were awarded in the nomination “The best theater performance”. Letters of appreciation were presented to the head of Nagornaya L.P. and the director of the play, Kiriyenko T.

On April 5, 2018, the S. Donentayev GDK hosted the festival of the patriotic song “Mugilik el”, dedicated to the active popularization of the idea of ​​a new Kazakhstani patriotism. Student Theater “Blue Bird” with the vocal number “Astana” received a letter of thanks for participation.

On April 8, 2018, the International contest of pop vocal and choreography “ImaStarKZ” was held in the concert hall “Kazmedia” in the city of Astana. A student of the Talgatzyzy Aisaule college took 1st place in the senior group in the “Dancing of the World” nomination with the dance composition “Tan Shapagaty.” The head Amirkhanova M. T. was awarded a diploma for preparing young talents.

On April 23, 2018, the teacher Sultanova G.M. spoke with the topic “Development of creative thinking and cognitive activity” at the regional seminar “College Library as a resource for modernization of TVE”, conducted by IPKPR in the Pavlodar region “Orleu”. An article about the seminar was published in the Republican newspaper “Educated Country” No. 19 of 05.22.18.

During the year, teachers of the commission Bisembaev K. Zh., Nagornaya L. P., Panikhin A. L. conducted internships for club workers in the region on the basis of OSTNT and KDD “Shanyrak” and the Cultural and leisure center of the city of Aksu: